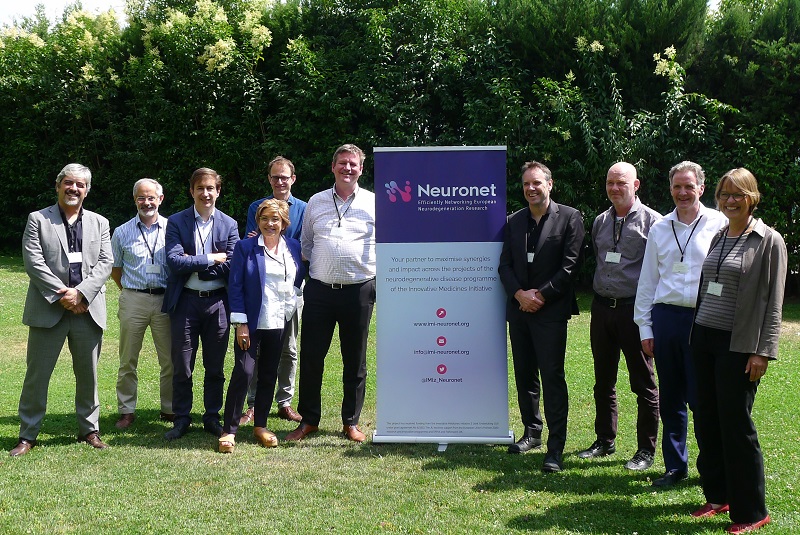 Neuronet’s high-level, overarching Scientific Coordination Board (SCB) is formed by 15 leaders of Innovative Medicines Initiative (IMI) projects in the area of neurodegeneration. The SCB is responsible for Neuronet’s strategic decision-making as well as the creation of specific Working Groups and Task Forces in which projects will be able to collaborate.

The first day started with an introduction to the concept and overall vision of Neuronet by the project leads Carlos Dìaz (SYNAPSE Research Management Partners) and Darrel Pemberton (Janssen Pharmaceutica NV).

After that, the SCB members each gave short introductions on their project goals, main results and outputs as well as identified gaps and needs, which were followed by questions and answers.

You can find an overview and some videos on the projects here.

The next part of the SCB meeting focussed on open discussions that revolved around Neuronet’s current and future activities. These included potential synergies and collaborations between projects, an impact analysis to be conducted for the overall portfolio, potential members of Neuronet Working Groups on specific topics and the first concept for a knowledge base aimed at providing the project leaders as well as IMI’s Strategic Governance Group for neurodegeneration with an overall overview of the programme and insights on the projects’ highlights.

The following day was dedicated to the Neuronet consortium. The consortium meeting gave the different work packages an opportunity to provide updates on their progress and to gather input from other members of the consortium. This meeting was attended by 14 consortium members as well as Elisabetta Vaudano (representing IMI) and Giovanni Espósito (European Brain Council/EBC) who attended the meeting on behalf of a Horizon 2020-funded coordination and support action entitled EBRA (European Brain Research Area).

As part of the consortium meeting, the following five Work Packages were discussed:

WP1: Project and impact analysis (presented by Jacoline Bouvy from NICE), with an emphasis on potential Key Performance Indicators.

WP2: Programme integration (presented by Carlos Dìaz from Synapse), which focussed on the feedback from the SCB during the previous day.

WP3: Tools and services (presented by Nina Coll from Synapse), with an overview of the design and content of the knowledge base.

WP4: Dissemination & Outreach (presented by Chris Bintener from Alzheimer Europe), providing insights into the draft communication strategy as well as the current state of progress regarding the development of the expert communication group members.

WP5: Coordination and Support Action Management & Sustainability (presented by Sandra Pla from Synapse), with an update on deliverables, budget and the planning of following meetings.

This was followed by Elisabetta Vaudano’s presentation focussed on the IMI’s expectations of Neuronet. Elisabetta highlighted some upcoming priority areas of the IMI, which included rare disease, patient engagement and advanced therapies. The consortium meeting concluded with an introduction to EBRA by Giovanni Espósito, which helped to reveal potential synergies between Neuronet and EBRA.