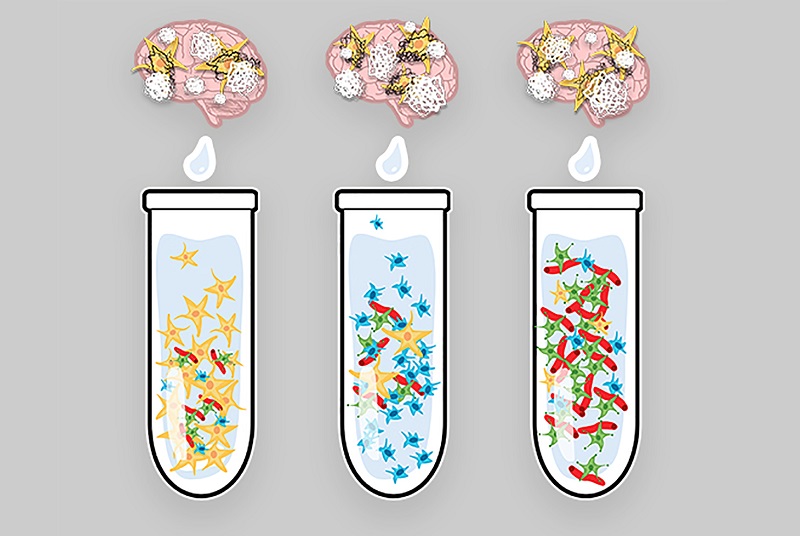 Two key pathological hallmarks of AD are the presence of amyloid plaques and tau tangles in the brain. Measurement of these biomarkers contributes to the A/T/N classification of AD, proposed by Clifford Jack and colleagues in 2016. However, AD varies considerably from individual to individual; clinical symptoms of AD are heterogeneous, with varying ages of onset and rates of disease progression. Looking beyond the A/T/N classification, and aiming to identify different biotypes of AD, Prof. Visser and his team set out to evaluate the protein composition of cerebrospinal fluid (CSF) samples from participants enrolled in the EMIF-MBD and ADNI studies. CSF contains hundreds of different proteins, and analyses of these proteins using proteomics techniques might provide some clues and biological identifiers that better capture the clinical heterogeneity of AD.

Assessment of the proteomic profiles of CSF from participants with AD/abnormal amyloid in both cohorts (n=425) showed there were large differences compared to people without AD (n=127). Mapping the protein profiles to specific biological processes, the researchers identified three separate AD subtypes across the EMIF-MBD and ADNI cohorts. The first, defined as a “hyperplastic” subtype, was characterized by higher levels of neuronal injury and increased levels of the BACE1 protein. The second subtype, on the other hand, showed higher levels of proteins associated with innate immune activation, as well as greater brain atrophy (measured by MRI scans) and clinical progression (measured using cognitive tests). In comparison, the protein profile of the third subtype showed signs of increased blood-brain barrier dysfunction and vascular damage, and lower levels of BACE1. Together, these results point to a role for CSF analyses in capturing the biological heterogeneity present in AD, potentially identifying targets for personalized therapy.

The original paper can be accessed here: