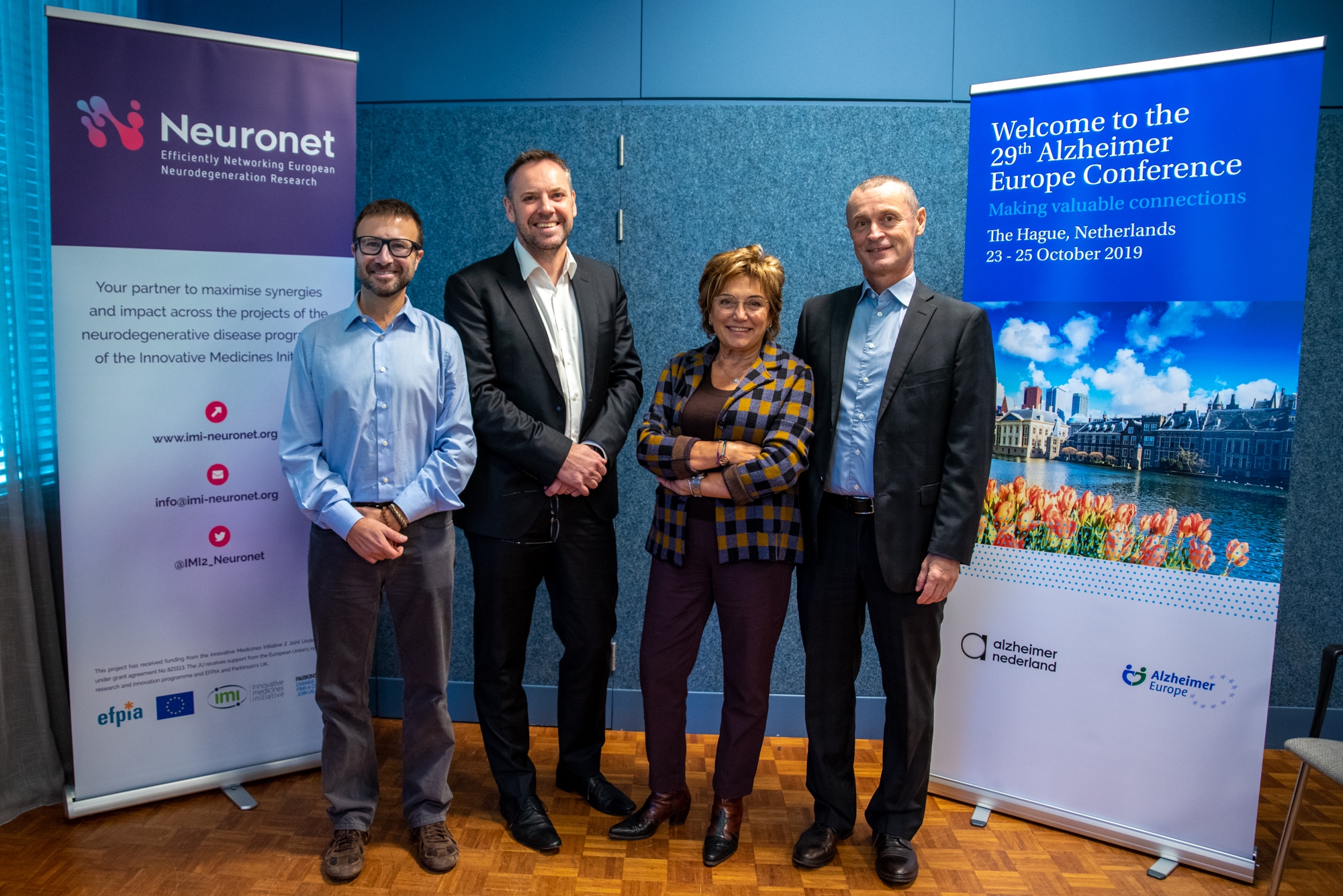 Neuronet, a coordination and support action funded by the Innovative Medicines Initiative (IMI), brings together 15 IMI consortium projects working on neurodegenerative disease (such as Alzheimer’s), encompassing over EUR 290 million in research funding.

The Neuronet programme held four parallel sessions as part of the Alzheimer Europe conference on 24 and 25 October. This involved showcasing projects that are working to improve our understanding, diagnosis and treatment of neurodegenerative disease.

The first parallel session was chaired by Lennert Steukers from Janssen. It was entitled “European research collaboration in Alzheimer’s disease and beyond”. The three speakers in this session introduced the work of the IMI on neurodegenerative disease (Elisabetta Vaudano, IMI), presented an overview of the Neuronet project (Carlos Diaz, Synapse Research Partners) and highlighted the importance of meaningful patient and public involvement in IMI research projects (Ana Diaz, Alzheimer Europe).

The second parallel session was chaired by Craig Ritchie, Director of the Centre for Dementia Prevention at Edinburgh University, and was entitled “From risk to dementia: Understanding disease progression and its causes”. In this session, leaders of the ADAPTED (María Eugenia Sáez), PHAGO (Angela Hodges) and AETIONOMY (Martin Hofmann-Apitius) projects presented their work on characterising some of the key molecular drivers of Alzheimer’s disease (AD), such as the ApoE genetic risk factor and the innate immune receptors CD33 and TREM2.

The third parallel session was chaired by Jacoline Bouvy of NICE and was entitled “Improving data access and the development of predictive models”. Four IMI projects were presented in this session: EQIPD (Malcolm Macleod), EMIF (Pieter Jelle Visser), ROADMAP (John Gallacher) and IM2PACT (Dominique Lesuisse) The EQIPD project is developing a framework for improving research quality, aiming to improve the drug development pipeline, while the EMIF and ROADMAP projects showcased the new platforms and tools they have developed to help researchers visualise and access clinical research data and real-world evidence. This session finished with a presentation on the IM2PACT project, which is working to understand the blood-brain-barrier in health and disease.

The fourth Neuronet session was chaired by José Luis Molinuevo, Neuronet Scientific Coordination Board member, and was entitled “Diagnosis, patient engagement and trials”. AMYPAD (José Luis Molinuevo) and EPAD (Craig Ritchie), two sister projects of the IMI neurodegeneration portfolio, highlighted their achievements in using amyloid-PET scans to diagnose AD (AMYPAD), and in creating clinical trial registries and cohorts of people at risk of developing Alzheimer’s dementia (EPAD). The leader of the MOPEAD (Mercè Boada) project then presented the four patient engagement models that they are currently testing, aiming to improve early patient engagement in clinical trials.  The final Neuronet session was brought to a close with a presentation on the RADAR-AD (Dag Aarsland) project, which is exploring how digital technologies can be used non-invasively to measure the progression of disability associated with AD.