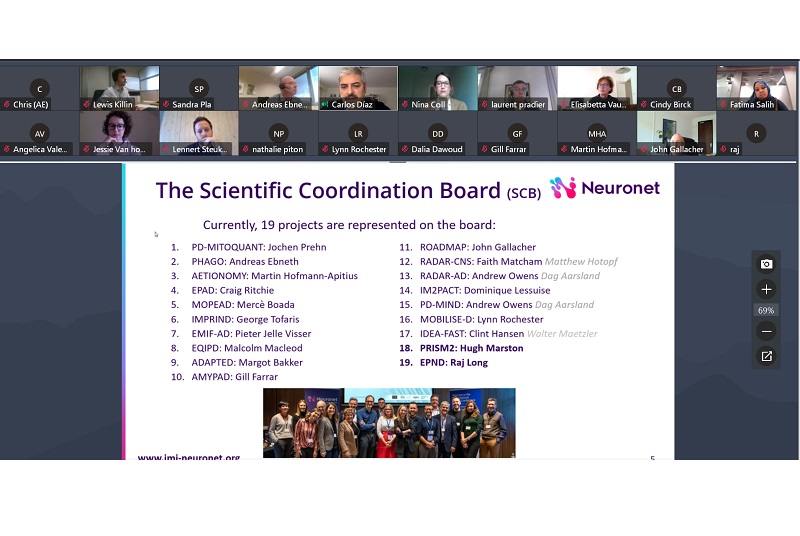 On 21 October, the Innovative Medicines Initiative (IMI) funded Neuronet Coordination and Support Action convened the seventh Scientific Coordination Board meeting (SCB). The Board plays a central role in determining how Neuronet should direct its efforts. As leaders of IMI neurodegeneration projects, the SCB members bring wide-ranging scientific, clinical, R&D and computational expertise to the table, helping us to identify key challenges and priorities to address.

The meeting was attended by representatives of the AETIONOMY, AMYPAD, EPND (to be launched in November 2021), IDEA-FAST, Mobilise-D,PD-MIND, PHAGO, RADAR-AD and ROADMAP projects along with members of the Neuronet consortium. Carlos Diaz, Coordinator of Neuronet, kicked off the SCB meeting by providing some general updates on Neuronet activities since the previous SCB meeting, which was held on 22 March 2021.

These activities include new updates of the Knowledge Base & Asset Map,, collaborations between EPAD and PHAGO as well as IDEA-FAST and MOBILISE-D, among others.

Next, Raj Long introduced the European Platform for Neurodegenerative Diseases (EPND) consortium which is planned to be launched in November 2021.

This was followed by a look into future activities of Neuronet, by the project leader Lennert Steukers. They included an introduction to results from a survey that Neuronet developed to better understand the impact of IMI projects on industry partners. The results were generally very positive and two adapted versions will be launched to better understand the impact on academic and SME partners too. Another topic of discussion was a Neuronet supported workshop on key considerations for using digital endpoints in Health Technology Assessment that will take place at the Virtual ISPOR Europe 2021. Concluding, the group discussed a landscape and gap analysis workshop that will be held in early November.

This was followed by a presentation by Elisabetta Vaudano who spoke about the current state-of-play with regard to the upcoming Innovative Health Initiative, which will build on the successes of, and lessons learnt from, IMI.

Next, Lewis Killin gave an update on the Neuro COHORT, which intends to build a European parent cohort that continuously follows up patients across Europe, to serve as basis to facilitate specific research projects and studies.

The meeting ended with a wrap-up and concluding remarks by Carlos Diaz.