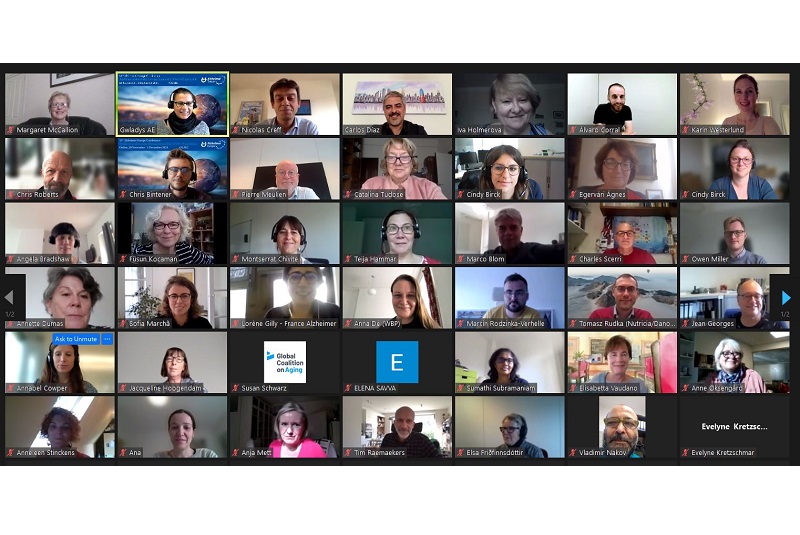 On 28 September, Alzheimer Europe and Neuronet co-hosted an online European Parliament Workshop, entitled “The Innovative Health Initiative: Building on the success of the Innovative Medicines Initiative” looking at the future public-private partnership between the EU and industry partners. The event was attended by 65 people, including EU policymakers, representatives from national Alzheimer’s associations, national health ministries, pharmaceutical companies, researchers and members of the European Working Group of People with Dementia.

The Innovative Medicines Initiative (IMI) is a partnership between the European Union and the European pharmaceutical industry. IMI facilitates open collaboration in research to advance the development of, and accelerate patient access to, personalised medicines for the health and wellbeing of all, especially in areas of unmet medical need. IMI is the world’s biggest public-private partnership (PPP) in the life sciences. Through the IMI2 programme, a €3.3 billion budget for the period 2014-2020 is available.

The Innovative Health Initiative (IHI) in a nutshell

IHI will build on the successes of, and lessons learnt from, IMI. The goal of IHI is to help create an EU-wide health research and innovation ecosystem that facilitates the translation of scientific knowledge into tangible innovations. These innovations should be safe, effective, people-centred and cost-effective, and cover prevention, diagnostics, treatment and disease management. IHI will contribute to a number of European policies, most notably Europe’s Beating Cancer Plan, the new Industrial Strategy for Europe and the Pharmaceutical Strategy for Europe.

Delivering for people with Alzheimer’s disease: the successes of the Innovative Medicines Initiative

Pierre Meulien, Executive Director of the Innovative Medicines Initiative (IMI). Started the first presentation with an outline of the successes of research projects funded by IMI in the area of neurodegeneration. He explained that the public-private partnership model had been of particular value for dementia and other neurodegenerative diseases, due to the complexity of the conditions and the high drug attrition rates. As such, over EUR 315 million has been invested in research into brain disorders thus far by IMI.

The portfolio has created resources and infrastructures to facilitate future research in the field. The collaborative nature of the projects in IMI was identified as a particular strength of the IMI approach, including the involvement of patient organisations such as Alzheimer Europe. Looking to the future, the importance of enabling technologies at a pre-competitive phase and pan-European consortia were singled-out as key elements for future research collaborations in the Innovative Health Initiative (IHI).

In addition, the creation of an interactive Asset Map has allowed for visual representation of the different resources, as well as identifying potential research areas not addressed by existing projects. Some of the challenges with existing funding mechanisms and collaborations were highlighted, including the sustainability of project outcomes beyond the IMI-funding period of projects, as well as a perceived disconnection between decision-makers and principal investigators. As such, he argued that there is an evident need for a systems leadership approach to these types of projects, as well as the need for a shift from a focus on projects to assets.

Nicolas Creff, Senior Manager Research Partnerships, Science Policy & Regulatory Affairs, European Federation of Pharmaceutical Industries and Associations (EFPIA), presented on the forthcoming IHI, outlining the new collaboration between both pharmaceutical and pharma technology partners and highlighting that the new focus for the partnership will increasingly be on cross sector opportunities which make better use of data, drugs and medical devices. Furthermore, there will be a move towards broader themes of public health priorities, rather than specific diseases areas, however, there will be a consideration of aspects such as the prevalence of disease, high economic impacts and the transformational potential of research. It is expected that the legislative basis for the partnership should be completed by the end of the year, with calls potentially being issued as early as the first quarter of 2022.

This was followed by a discussion & questions session during which attendees could interact with the presenters.

Susan Wile Schwarz, Director of Communications, Global Coalition on Aging, presented an upcoming report, the Alzheimer’s Innovation Readiness Index, jointly written with Alzheimer’s Disease International. The report compares 10 European countries across 5 different domains: strategy and commitment; early diagnosis and detection; access to care; awareness and monitoring, and; care standards and settings. The report demonstrates that whilst there is some progress in countries, there remains significant variation across Europe, with many long-standing issues related to diagnosis, access to care and provision of adequate resources and funding, meaning that there are still significant difficulties for people with dementia and their carers across Europe. The report will be launched later in October 2021.