On 18 February, Alzheimer Europe held its first lunch debate of 2020. The debate was entitled “The Innovative Medicines Initiative (IMI): Advancing Alzheimer’s research through public-private partnerships” and was organised in partnership between Alzheimer Europe and the Neuronet Coordination and Support Action. A total of 70 people attended the debate, including representatives from national Alzheimer’s disease organisations, members of the European Working Group of People with Dementia (EWGPWD), academics, industry representatives but also policy makers. 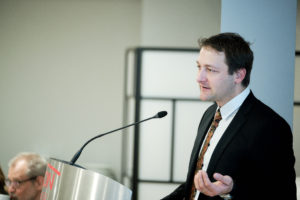 Christophe Hansen (MEP), Vice-Chairperson of the European Alzheimer’s Alliance (EAA) opened the session, welcoming attendees and thanking them for taking the time to attend the meeting.

He acknowledged that dementia should be a research priority since there is no disease modifying treatment and no cure for underlying conditions such as Alzheimer’s disease. In relation to how dementia is understood, Mr Hansen briefly outlined some of the changes in recent years, including developments in pre-symptomatic detection and development of new ways to detect the condition (e.g. through biomarkers) shifting the focus in relation to diagnosis and detection of the disease.

He further highlighted that the focus of research had not solely been on basic science or drug discovery, but also how health records and data can be better utilised to facilitate high quality research. However, this also led to the need for data and information generated to be better coordinated to ensure data did not remain fragmented and difficult to access.

Mr Hansen noted that progress could only be made with investment in research, with a significant source of funding being public-private collaborations such as IMI 1 (2008-2013) and IMI2 (2014-2020).

Mr Hansen concluded his remarks by noting that it was essential that Horizon Europe continued this collaborative approach to research.

The Neuronet Coordination and Support Action 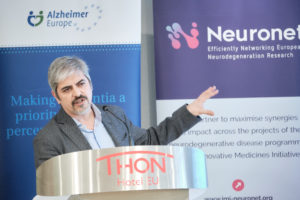 Carlos Díaz, Neuronet project coordinator, opened his presentation by providing an overview of the action and its role in supporting the neurodegeneration portfolio of the second IMI.

He then provided an overview of the current landscape in relation to research projects on neurodegeneration within the IMI portfolio. In particular, he explained the complex nature of the five key components which impact upon each project: Targets; Timescales; Knowledge; Hierarchies; and, Funding. Within the IMI projects, Mr Díaz noted that this translated into hundreds of institutions and thousands of researchers, each bringing their own considerations with regards to these five areas.

Neuronet therefore aims to avoid a top-down approach, instead operating a “switchboard” model, connecting people, tools and technologies, as well as supporting synergies between projects. As part of this, a just in time approach ensures timely linkages between projects and their outputs, aligning to other projects which may have related or relevant work.

Mr Díaz outlined the governance structure of Neuronet, setting out the roles of the Scientific Coordination Board (SCB), the Working Groups (WG) and Task Forces (TFs).

He explained that the SCB is composed of leaders of the IMI projects, who set the overall direction and strategy for Neuronet. He further outlined the role of the four thematic WGs which contain expert members from the projects and which are tasked with drafting guidelines and white papers on the subjects of data sharing and reuse, regulatory issues, ethics and patient privacy, and sustainability. Finally, the TFs are designed to be small cross-project teams which will implement specific work on synergies within a set time frame.

Another important online tool, Neuronet is developing is its knowledge base, a resource providing an overview of projects and activities within the IMI neurodegeneration portfolio. As part of this, an asset map will provide a visual overview of the outputs of each project.

Mr Díaz concluded by noting that the future landscape should be one where there are joint perspectives, embedded ideas of leadership (which recognise that not everyone has to try and lead) and which cultivate a problem solving culture. 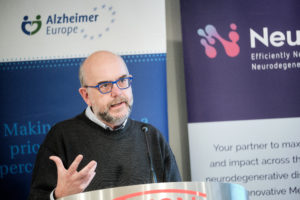 Bart Vannieuwenhuyse, the Senior Director Health Information Sciences for Janssen presented on the European Medical Information Framework (EMIF) project, which had been undertaken as part of the IMI 1 partnership.

This project stemmed from recognition of the many silos of data which were not being utilised in an optimal way for research. The work was a precursor for later data projects, which are part of the Big Data for Better Outcomes (BD4BO) initiative.

Mr Vannieuwenhuyse outlined the EMIF project, which ran between 2013-2017, involving 58 partners from 14 European countries and had a total budget of EUR 56 million.

The project had three components: EMIF-Platform; EMIF-Metabolic; and, EMIF-AD. The overarching platform aimed to develop a framework for evaluating, enhancing and providing access to human health data across Europe, whilst also supporting the condition-specific areas of obesity and Alzheimer’s disease.

For the EMIF-AD component of the project, the goal was to identify predictors and diagnostic biomarkers for AD; identify and link AD cohorts; define phenotypes and develop a prediction model for cognitive decline; and, acquire data to discover biomarkers and genetic markers for pre-dementia AD.

Mr Vannieuwenhuyse described the AD Catalogue which had been developed as part of the project to create a publicly available tool allowing researchers to find AD cohorts of interest based on cohort metadata, aiming to stimulate the re-use of data and establish new research collaborations, as well as providing a comprehensive overview of all available AD cohorts, with tools to search, select, and compare different AD cohorts.

He further explained the AD cohort explorer process which allows for group level queries to identify subjects and variables of interest, on harmonised datasets, in addition to enabling researchers to easily find the right subjects, stimulating and facilitating the re-use of AD cohort data.

Mr Vannieuwenhuyse also highlighted the EMIF 1000 cohort, which aimed to establish large sample sets for biomarker discovery in EMIF-AD by re-using data and samples of existing AD cohorts spread over Europe. In doing so, this created a digital cohort of over 1000 people, incorporating data from MRI scans, Cerebrospinal Fluid (CSF), DNA profiling and amyloid measurement. This digital cohort continues to be used by researchers, even after the conclusion of the project.

The presentation concluded by highlighting a successor project to the EMIF, the European Health Data and Evidence Network (EHDEN), which aims to harmonise 100 million health records, create an ecosystem of certified harmonised data sources and create a system of federated analytics.

Neurodegeneration in the Innovative Medicines Initiatives 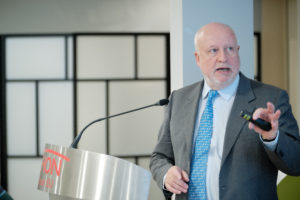 Pierre Meulien, the Executive Director of the Innovative Medicines Initiative IMI, presented on the work of public-private partnerships in neurodegeneration research to date, as well as looking towards future collaborations.

The presentation highlighted that the nature of the IMI partnership was unique and that it was unlikely that such a collaboration would be possible elsewhere in the world. It was explained that the IMI portfolio covers many different areas of work including brain disorders, drug discovery, cancer and data knowledge and management, amongst others.

He articulated the IMI as an ecosystem for innovation, allowing for multi-sector and multi-disciplinary engagement at the forefront of cutting-edge research, providing the necessary scale for funding, expertise, knowledge, skills and resources.

The difference in the funding mechanisms between IMI 1 and IMI 2 was explained, with a new concept of “Associated Partners”, providing an opportunity for other organisations to contribute to and play and active role in the research programme, with 36 having done so, contributing over EUR 200 million, so far.

In relation to neurodegeneration, Mr Meulien noted that diagnosis and therapeutic research had shifted earlier in the disease process, moving the focus towards the pre-symptomatic stages of the condition. Long term, this shift will continue as developments are made into pre-symptomatic risk prediction.

In relation to the dementia portfolio specifically, Mr Meulien highlighted AETIONOMY, EMIF, EPAD and AMYPAD as some of the most prominent and successful projects. Respectively, these address(ed) issues around the underlying cause of dementia, the risk factors in developing the condition, improving clinical trial design and the uses of brain scanning.

In concluding his presentation, Mr Meulien outlined some of the broad themes which have so far emerged in relation to a future public-private partnership on health. The focus will go beyond medicines development, with prevention and early detection at its core, as well as integrating big data and digital solutions. Additionally, he explained that the voice of patients and citizens would continue to be prominent within the future collaboration.

An open discussion followed, with attendees raising questions and comments. Nelida Aguiar, supporter of Idalina Aguiar from the EWGPWD, shared her experience of struggling to participate in research due to her location on an island and urged the panellists to ensure that people in rural areas and islands were able to participate.

Lenny Shallcross, Executive Director of the World Dementia Council (WDC), addressed the issue of the difference between the messaging for people with a diagnosis of dementia and those at future risk of developing the condition. Mr Meulien noted that health systems are not currently sustainable and discussion around prevention must be part of the discussion around dementia.

Chris Roberts, Vice Chair of the EWGPWD spoke of the need to start at school and to educate young people in relation to dementia.

Jean Georges, Executive Director of Alzheimer Europe, asked what could be improved for future research projects and programmes. Mr Meulien highlighted the need to have more small and eastern European countries involved in projects. Mr Vannieuwenhuyse noted that there was a need to find a better balance on reporting for projects, as well as a better way of establishing consortia between public and industry partners.

Christophe Hansen addressed questions to each of the presenters, asking:

Mr Vanniewenhuyse reiterated the importance of public-private collaborations but noted that research in this area was still in its early stages, with new science and new therapeutic interventions needed. He noted that as progress was made towards a treatment, it may lead to stronger collaboration and greater sharing of data.

Mr Diaz noted that too often researchers/organisations approached research in terms of possessing data, research, etc. and that there was a need for projects such as Neuronet to play an ambassador role, emphasising the mutual benefits of collaboration.

Mr Meulien shared that Horizon 2020 would continue to fund UK partners for the duration of the projects, not just the end of the transition period. He noted that as the UK received 25% of all IMI money, coupled with the research expertise in the UK, Brexit was a lose-lose situation for the future programme.

Charles Scerri, Vice Chair of Alzheimer Europe brought the session to a close by thanking attendees and speakers for their contribution to the event. Christophe Hansen reflected on the need to reduce the fragmentation in the research, as well as maintaining significant funding in the future of research at the European level.

Scroll back to top
We use cookies to offer you a better browsing experience and to analyze site traffic. Read about how we use cookies and how you can control them in our Cookie Policy. If you continue to use this site, you consent to our use of cookies. AcceptCookie policy
Necessary Always Enabled