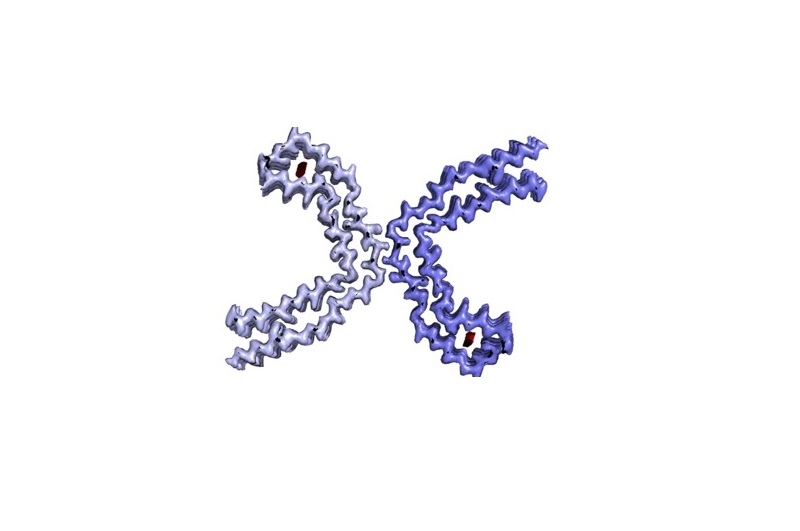 A cross section of the type-I CTE filament. Credit: MRC-LMB

The findings add to our understandings of how different forms of dementia develop, and could pave the way for future treatments for CTE and other diseases associated with abnormal tau filaments. CTE is associated with repeated blows to the head, as experienced by people who regularly play contact sports such as boxing, rugby and football. Symptoms include behavioural changes, confusion and memory loss.

There is no treatment and a definitive diagnosis can only be made via an autopsy. In this latest study, the scientists studied tau filaments taken from the brains of three people with CTE: a retired professional American football player, who had died aged 67, and two former professional boxers, who had died aged 67 and 78, respectively. The structure of the tau filaments in all three CTE patients was identical, but different from the structure of tau filaments taken from Alzheimer’s patients. Michel Goedert led the study with Sjors Scheres at the Medical Research Council Laboratory of Molecular Biology in Cambridge, UK.

Most notably, the CTE patients’ tau filaments appeared to have ‘cavities’ which were filled with other molecules. Michel Goedert led the study with Sjors Scheres at the Medical Research Council Laboratory of Molecular Biology in Cambridge, UK.

‘The fact that the structures of the tau filaments were identical in the American football player and both boxers suggests that we’ve found a new criterion for post-mortem diagnosis of the disease. Our new knowledge of these structures could make it possible to diagnose CTE in living patients by developing tracer compounds that will specifically bind to the tau filaments of CTE.’, said Michel Goedert.

‘We don’t know the chemical nature of these molecules yet, but we suspect they may play a role in the assembly of tau into filaments, and that their abundance may determine why some individuals develop CTE and others do not. The next stage of our research will be to identify these molecules and understand more about their role in tau assembly, as they may represent a possible target for drug development.’, said Sjors Scheres.

The paper is available on Europe PMC.

The image shows a cross-section of the type-I CTE filament, with the two (identical, symmetry-related) protofilaments shown in light and darker blue and the unidentified density shown in (dark) red.

Find out more about the IMPRiND project in this spotlight on early-career investigators: an interview with Benjamin Falcon: