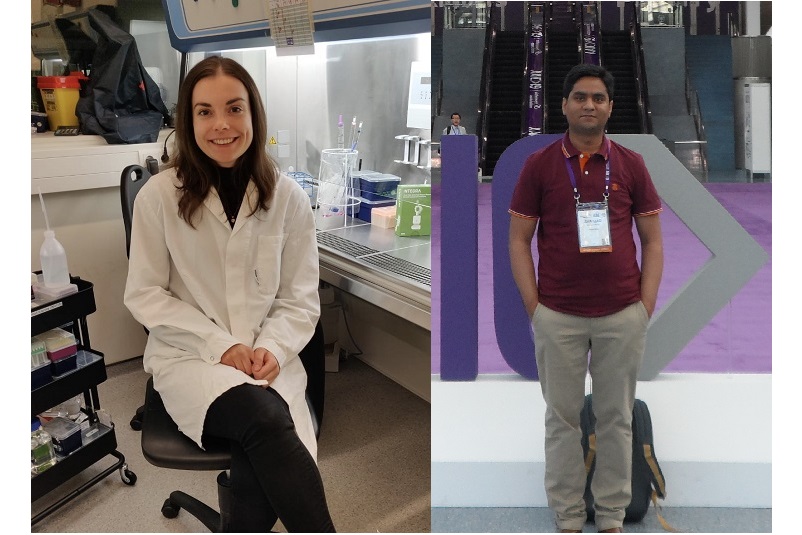 Could you tell us how you worked together on the ADAPTED project?

Shahzad: We had a really productive collaboration with MIMETAS in ADAPTED! ApoE4 is one of the most prominent genetic risk factors for Alzheimer’s disease (AD), and we wanted to see whether plasma of various ApoE genotype carriers may affect the integrity of the blood-brain barrier, which is dysfunctional in AD. To do this, we shared blood plasma samples from AD patients from the Erasmus Rucphen Family (ERF) study with MIMETAS, which were then tested in their 3D blood-brain barrier models.

Tania: We used the plasma samples that Shahzad provided to test their effect on an in vitro model of the blood-brain barrier. To make this model, we use the MIMETAS OrganoPlate, which is a microfluidic platform that allows 3D culture of up to 96 individual tissue “chips” in a 384 well plate format. Within these chips we can incorporate important features like an extracellular matrix, multiple cell types, and perfusion.

For the blood-brain-barrier model, we grew brain microvascular endothelial cells into a 3D tube structure – similar to small blood vessels in the brain – and then added other brain cells such as neurons and astrocytes. Using this model, we were able to test how plasma samples from different ApoE genotype carriers may affect blood-brain barrier permeability.

What did you do before working on ADAPTED?

Shahzad: I’m originally from Pakistan and completed an undergraduate degree in Microbiology and Chemistry from Government College University, Lahore, Pakistan. After that, I did my Master in Life Science Informatics at the Bonn-Aachen International Center for information technology in Bonn, Germany. Various academic internships and my master research at DKFZ, Heidelberg developed my research interest in complex diseases such as AD and cardiovascular disease. I did my second Master’s degree as a part of the Erasmus MC PhD program in genetic epidemiology at the Netherlands Institute for Health Sciences.

During my PhD with Professor Cornelia van Duijn, I was working on multi-omics to elucidate molecular pathways and risk of AD. In ADAPTED, I worked on integrating genetic and metabolomics data from people with AD, trying to understand how various genetic risk factors including ApoE4 are related to the level of different metabolites in the blood. In ADAPTED, I also worked on projects involving identifying new protein and metabolomic biomarkers for AD, using samples contributed by academic centres in Rotterdam, Spain and Germany.

Tania: I’m originally from New Zealand, where I did an undergraduate degree in Biomedical Science at the University of Auckland. I really enjoyed a lab-based internship I did during my degree, which made me very keen to do my Honours degree in Biomedical Science, and then I started a PhD in the Department of Physiology and Centre for Brain Research.

During my PhD in Auckland, I worked with two-dimensional cultures of cortical neurons. Using these cultures, we were aiming to understand the importance of an extracellular matrix sugar called hyaluronic acid in brain development. At the end of my PhD I wanted to broaden my skillset and move overseas, so a colleague suggested I contact MIMETAS. I joined MIMETAS in January 2019 and have really enjoyed working in a lab-based environment, while having the opportunity to experience how research works in an industry setting.

Tania, you did your PhD in an academic lab then moved to industry. How have you found working in industry compared to academia?

Tania: In many ways, working in academia is similar to working in industry: publications and PowerPoint presentations figure highly in both settings! However, from my experience there is a faster pace in industry, with much shorter deadlines: also, people often work on more than one project.

Another big difference is that you can be involved in many other aspects of research when working in industry, such as training, commercial projects, and marketing activities.

Shahzad, you recently finished your PhD in Rotterdam. Which career track are you pursuing at the moment?

Shahzad: I’m currently doing a postdoc in Leiden, at the Academic Centre for Drug Research with Professor Thomas Hankemeier. I’m working on identifying the metabolic factors which allows cross talk between gut microbiota and the brain, and data integration using systems biology approach. My work in Leiden basically involves data analysis and bioinformatics as well as close collaboration with lab-based researchers.

I still collaborate with MIMETAS, where we are interested in assessing the effect of various metabolites and genes on neuro-vasculature and neuronal development. In future, I would like to stay in academia; in my experience, there is a bit more freedom and breadth in terms of the topic of research. For example, during my PhD I worked on many different dimensions of AD research as part of big consortiums using my multi-disciplinary skills. There are also some really interesting academic developments in multi-omics data integration and gut microbiota research, which I am keen to pursue.

What do you see as the key challenges for your field?

Shahzad: We now have access to huge amounts of clinical data, however we need new, sophisticated methods to harness the power of these data, so we can use them to improve our understanding of complex disease. In AD specifically, we need better biomarkers to accurately identify the different stages of disease and risk groups of AD patients for clinical trials; there is also a pressing need to identify new drug targets.

Tania: For my field, one of the main challenges is establishing translational models, since many current models are failing to predict the efficacy of new therapeutics. One of the ways we are aiming to overcome this is by creating more complex models that not only include key aspects of the tissue of interest, such as flow conditions and 3D vessel structures, but are also high-throughput and relatively simple to work with.

On the other hand, what do you see as some recent highlights for your field, specifically related to AD research?

Tania: There have been some really exciting developments in the organoid field. Although this is still quite a new field, there is huge potential for using brain organoids to model neurological diseases such as AD in vitro, and to further investigate genetic risk factors such as ApoE. For example, a recent Neuron paper (Lin et al., 2018) showed that ApoE4 cerebral organoids had increased AD pathology compared with ApoE3 organoids.

Shahzad: The recent progress announced for the Aducanumab trials is a big highlight for the AD field. It will be interesting to see whether the findings of the EMERGE and ENGAGE trials are validated, potentially using the new generation of biomarkers.

ADAPTED involves many academic, industry and SME partners. What has been your experience of working on such a large public-private partnership?

Tania: It has been great to connect with researchers from industry and academia and to work towards a common research goal! It can also be challenging that some consortium projects involve up to 30 organisations, each with individual roles – this makes it hard to keep up with what is happening across complex projects and underlines the need for good and effective communication. However, I have witnessed that particularly in the field of neuroscience both academic and industry partners can improve their research quality and efficiency through collaboration.

Shahzad: I have previously worked with many academic consortia on GWAS projects, so working on ADAPTED was a fantastic opportunity to work more closely with industry. When entering the ADAPTED project, I was very curious to learn more about industry.

It was fulfilling to learn about industry priorities and modes of work, such as the tight timelines and target based approach, which I have come to highly appreciate.

Do you have any advice for ECRs looking at exploring alternative career options? Is there something you would like to emphasize?

Tania: Definitely start looking at potential career opportunities when you start your PhD! There are lots of varied options, so keep an open mind about what you might want to do after you finish your PhD.

Great research happens in many different types of organisations, so ultimately it comes down to personal preference and what works best for you at the time. Also, keep in mind that working in public-private partnership projects such as ADAPTED can be the best of both worlds, because you work with and learn from researchers from both industrial and academic settings. I feel very fortunate to be involved in these collaborative projects.

Shahzad: I fully agree with Tania – you should definitely keep an open mind when doing your PhD! During my career to date, I have always tried to understand both industry and academia, and in my experience, both are working towards a common goal: a healthier future.

With this in mind, I can fully recommend to keep an open eye on job and PhD opportunities in public-private partnership projects. I therefore hope that the European Union continues to invest in public-private neuroscience projects, which enables this kind of collaboration in the first place.

The Leiden Academic Centre for Drug Research website is found at: https://www.universiteitleiden.nl/en/science/drug-research

Read more from our series of interviews with early-career researchers:

Spotlight on early-career researchers: a Neuronet interview with Lianne Reus