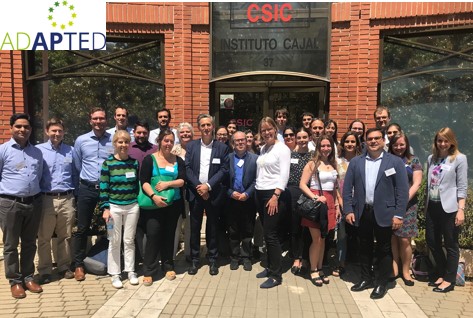 The ADAPTED (Alzheimer’s Disease Apolipoprotein Pathology for Treatment Elucidation and Development)  project is a major initiative aiming  to improve the understanding of the function of the APOE gene and the role it may play in the development of Alzheimer’s disease (AD). APOE is well known as a risk factor for developing the disease but precisely how this gene contributes to the risk of developing AD is not known. ADAPTED brings together the expertise of researchers in universities, research institutes and biotech and pharmaceutical companies from across Europe and the USA.

The ADAPTED project has started on 1st October 2016 and comes to an end on 30th September 2020. The ADAPTED members are  very busy as they work on collecting the remaining data and completing the final analyses which were delayed due to the COVID-19 outbreak.  They expect a number of papers to come from this ongoing analysis – every member of the ADAPTED consortium is currently involved in preparing a manuscript!

So far, the ADAPTED project has published several papers including: